Not content with donating umpteen brass instruments to the project earlier this year, Rowena (or "Hoeweena..." as every Brazilian insisted on pronouncing it) came out to help us with the project for six weeks during October and November. Despite not speaking Portuguese (sorry Rowena, should have given you more of a heads up about that one!) Rowena fitted right in and gave lessons on tenor horn, trombone and trumpet to the kids as well as playing a mean reco-reco (Brazilian scrapey percussion instrument) in the lessons of our percussion teacher, Mangueirinha. Here's Rowena playing trombone with the children at a public performance in the centre of Rio: 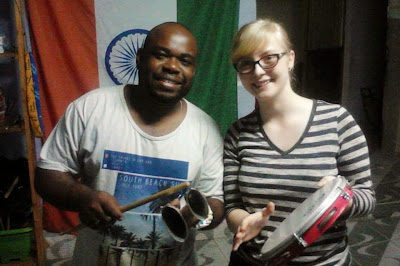 Rowena inevitably also got roped into helping out with our fundraising curry club.

As well as helping out at the project, Rowena sat in with various bands around Rio, including The Baixada Jazz Big Band, the Fanfarrada orchestra, Orquestra Voadora, and at the classic samba party in Rio that happens on Friday nights at the Pedra do Sal. Here's Rowena sitting in with the Baixada Jazz Big Band (they were well impressed!)

Aside from her trombone-playing abilities, the children were also fascinated by Rowena's drawings of the wildlife in the favela: 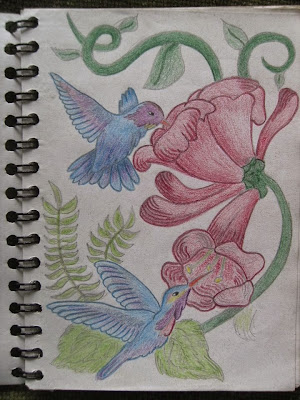 To come to live in a favela in Rio de Janeiro at age 18 is extremely courageous, and we're all extremely glad that Rowena took the plunge. Hopefully to have experienced Brazilian music and culture at such an early age will be an experience that stays with her forever, just as to have met and have had lessons with a talented 18 year-old English trombone player will be something that the kids at the project won't forget in a hurry.