Lessons in the Pereirão Favela

We are now giving lessons in the Pereirão favela, which is situated between the Santa Teresa and Laranjeiras districts, and has around 2,000 inhabitants. The lessons happen on Tuesday and Thursday afternoons at Tom's house.

Yesterday we had a small group of 7 children between the ages of 7 and 13, who had a glockenspiel lesson and started to learn to read rhythms. In our Glockenspiel lessons, instead of of using traditional music notation, children learn with a system of coloured shapes which is easy for beginners to grasp, and which also lays the ground for learning to read traditional musical notation.

This system, called "Figurenotes", was developed at the Resonaari school in Finland. As the following video shows, the good thing about using Figurenotes is that it takes much less time for children to get a musical result (the video was taken at the end of new student Vinicius's first lesson):

Bloco Tô Ligado at the Last Rehearsal of Cordão do Boitatá

Yesterday the children of Bloco Tô Ligado played in the interval of the last rehearsal of carnival bloco Cordão do Boitatá in the Morro dos Prazeres favela:

We threw a pre-carnival ball at Projeto Tô Ligado this Sunday to provide an opportunity for the children to play in public. The children played all of the classic carnival marches and it ended up being a great party. Big thanks to everyone who came along and helped out! 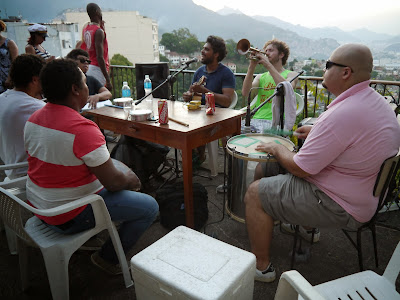 Rehearsing with the Children of Projeto Tô Ligado

On Sunday, the children of Projeto Tô Ligado will play at their own pre-carnival ball at the project. Today was the last full rehearsal:

For anyone living/staying in Rio, just click the flyer below to see the Facebook invite for Sunday's party (in Portuguese):