Veja is Brazil's best selling weekly magazine. In this week's Rio supplement there is an article about our work with the children in Santa Teresa's favelas. 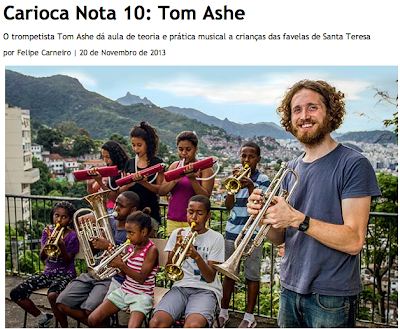 Here's the article translated into Engliah:

Afternoons in the French Square in Santa Teresa have become more musical over the last year. This is the location of the Welcome Mission Centre, the institution where the British trumpet player Tom Ashe teaches 26 children between the ages of 7 and 14 from the Pereirão, Fallet and Fogueteiro favelas how to play brass instruments such as trumpet, trombone, euphonium and tuba as well as how to read musical notation. "The samba schools have ended up creating a plethora of virtuoso young percussionists, but the brass tradition that Brazil had back in the 1940s has been lost over time", explains Ashe, 34, in his uneven Portuguese. Seeking to rescue this musical heritage, and imbued with a desire to help to improve the lives of the children in the nearby favelas, he resolved to go back to basics by teaching Rio's classic songbook. The little ones start with songs such as Cabeleira do Zezé, Asa Branca, Rap da Felicidade and the class favorite Mulata Ye Ye Ye. "I asked them what they liked to listen to, and they responded: Bonde das Maravilhas", tells Tom, who was subsequently shocked when he then learned about the group of young girls who popularised the erotic dance the "quadradinho de oito". "I ended up going for Carnival songs, which everyone knows."

In love with samba music, the trumpet player decided to exchange Europe for Rio six years ago as a way of improving his musical knowledge through first hand experience. At the moment he makes his living from the two jazz bands that he plays in. The teaching project is touched by the difficulties inherent in attempting this type of activity. Unable to afford new instruments, he brings second hand ones over from England. To cover wage costs, Tom has organised what is known as the Curry Clube. Every Wednesday he prepares Indian food and opens his house in the Pereirão favela to an average of 30 diners who pay 20 Brazilian Reais each. It's hard work, but he assures that the result is worthwhile. "I thought that maybe three in ten of the kids would take to music, but as it happened they're all into it. It's great to see kids sharing in the enjoyment of making music."
Posted by Tom Ashe at 08:44